SINGAPORE: A total of 9,403 reports of suspected adverse effects associated with Pfizer-BioNTech and Moderna's COVID-19 vaccines have been submitted in Singapore as of end-July, said the Health Sciences Authority (HSA) on Monday (Aug 16).

These reports accounted for 0.12 per cent of the more than 7.5 million doses of mRNA COVID-19 vaccines administered in Singapore between Dec 30 last year and Jul 31 this year, said HSA in a safety update.

Of these, 389 reports - or 0.005 per cent of administered doses - were classified as serious adverse events.

These were "consistent with those typically observed following vaccination" and typically resolved within "a few days", said HSA.

Among the serious adverse events, the most frequently reported were anaphylaxis and other severe allergic reactions. 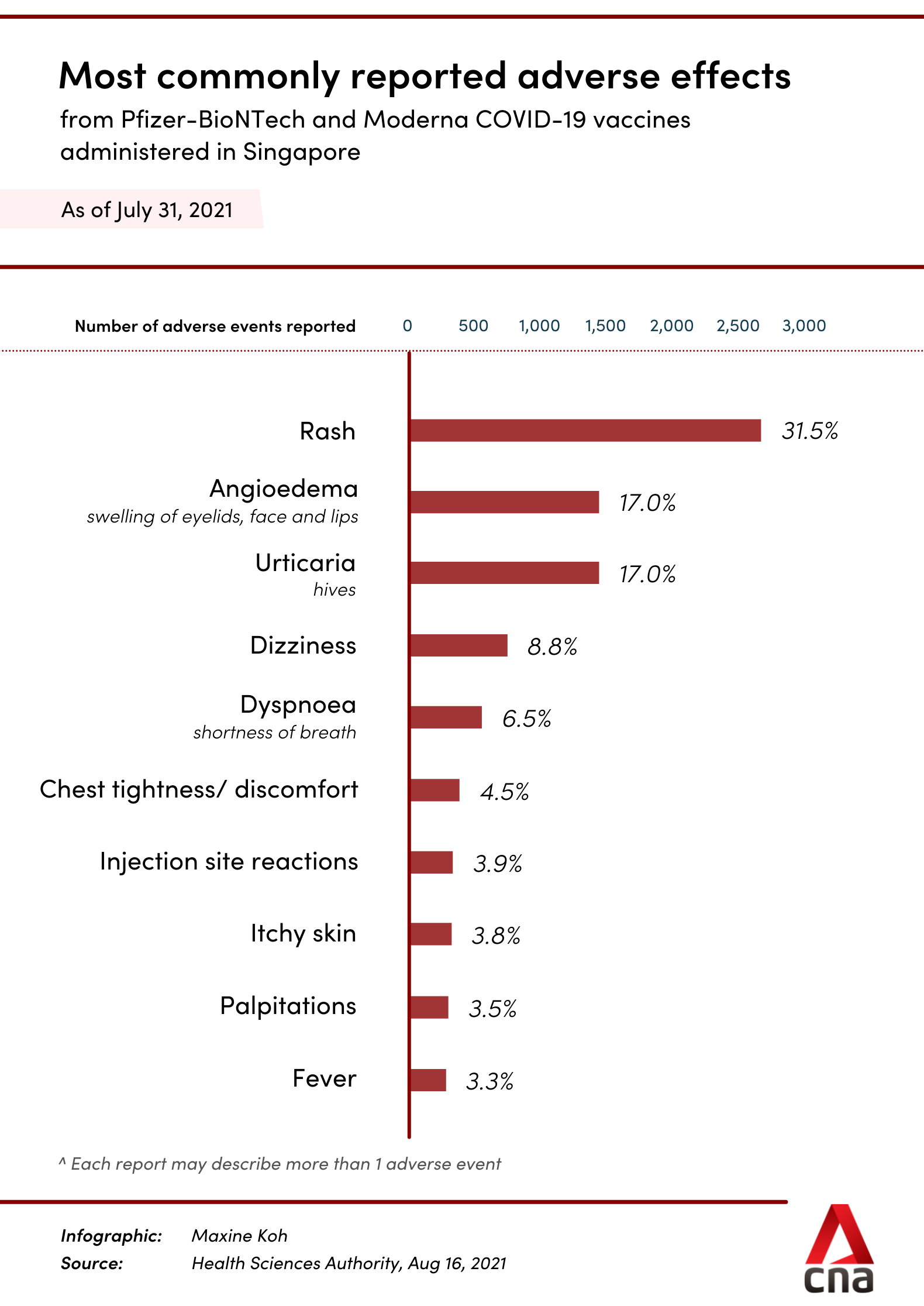 In the age group of 12 to 18 years, the most commonly reported adverse effects included rash, hives, the swelling of the eyelids, face and lips, shortness of breath, fever, dizziness and light-headedness.

Fainting has also been reported in this age group, "generally triggered by anxiety and fear of pain during the vaccination process, rather than by the vaccines", said HSA.

The local incidence rate for such incidents in this age group is similar to overseas reports, it added.

Fifty-eight instances of anaphylaxis, a severe life-threatening allergic reaction, have been reported as of end-July, said HSA.

HSA said this is a "known adverse reaction associated with vaccines in general" and its local incidence rate is similar to those reported overseas.

The authority also reported 34 cases of myocarditis and pericarditis linked to the vaccines, of which 14 people were aged 30 and above, while the remaining cases were under the age of 30.

"Although there is a small increased risk of myocarditis and pericarditis in the younger age groups, the local incidence rate remains low," said HSA.

"Most of the cases in the younger age group have responded well to treatment and have recovered or were discharged well from hospital," it added.

The authority also said that there has not been "a greater frequency" of heart attacks or strokes observed in vaccinated persons locally.

"It is important to note that heart attacks and strokes occur naturally within our population, regardless of whether or not people are vaccinated," said HSA.

"The frequency of heart attacks and strokes in vaccinated persons locally is within the background incidence rates, and to date, there is no evidence that the vaccines can directly cause these events," it added.

Additionally, 76 cases of Bell’s Palsy - facial muscle weakness due to inflammation of the facial nerve - have also been observed.

"Generally, patients will recover completely even without treatment. The incidence rate is within the background incidence," said HSA.

HSA said their benefits continue to outweigh the "known risks in a pandemic", based on the data to date.

For the Sinovac-CoronaVac vaccine, 47 adverse events including four serious cases have been reported.

A total of 104,061 doses have been administered as of Jul 31 since the vaccine was made available for people with specific medical needs on Jun 18.

"HSA will continue to actively monitor the safety profile of the COVID-19 vaccines and relevant regulatory actions will be taken to safeguard public health," it said.

BOOKMARK THIS: Our comprehensive coverage of the COVID-19 pandemic and its developments

Download our app or subscribe to our Telegram channel for the latest updates on the coronavirus outbreak: https://cna.asia/telegram