NDR 2021: Progressive wages to be extended to more sectors as part of move to uplift lower-wage workers

This will also cover specific occupations across all sectors, starting with administrative assistants and drivers.

This was among three recommendations from a tripartite work group to uplift lower-wage workers. The other two are: Requiring companies hiring foreign workers to pay all local employees a minimum salary of S$1,400 and to introduce a Progressive Wage Mark.

Negotiations on wage increases for workers in security, landscape and lift and escalator sectors to be concluded soon: Tan See Leng

The Government has accepted the three recommendations, Mr Lee said in his National Day Rally speech.

“During COVID-19, many lower-wage workers were on the frontline. And Singaporeans saw the importance of jobs like cleaning, food delivery and security. We gained fresh respect and appreciation for these workers,” he said.

The tripartite work group, chaired by Senior Minister of State for Manpower Zaqy Mohamad, was launched in October last year.

The work group was meant to come up with measures to address issues on the salaries and work environment of low-wage workers. It includes members from the National Trades Union Congress (NTUC) and the Singapore National Employers Federation.

Under the second recommendation, companies hiring foreign workers have to pay all local employees at least a Local Qualifying Salary. This is currently S$1,400, but will be adjusted from time to time, Mr Lee said in his televised speech.

Companies today already have to pay this qualifying salary to some local employees, depending on how many foreigners they hire.

The public sector is a major buyer of goods and services, and will take the lead by purchasing only from such businesses, he added.

Lower-wage workers and their families receive “significant support” from the Government in areas like housing, healthcare, education and in retirement, said Mr Lee.

“Despite this, lower-wage workers are more stressed than others. Their jobs are less secure. They are more likely to be laid off. They have less savings to tide over hard times. In the pandemic, their situation has been precarious.”

This is why “extra help” for lower-income households was included in every COVID-19 Budget package, he added.

“Beyond emergency assistance, lower-wage workers need longer-term support. In many countries, the earnings of such workers have stagnated. But in Singapore, their lives have improved as the country progressed,” the Prime Minister said.

“Because the Government has helped them upgrade their skills, use machines and technology, and become more productive.”

With the Workfare Income Supplement Scheme, “effectively a negative income tax”, the Government tops up the salaries of lower-wage workers in cash and CPF contributions instead of taxing their incomes, said Mr Lee.

Almost half a million workers benefit from the scheme, which costs S$850 million a year, he added. This will be increased to S$1.1 billion in two years’ time.

“This allows us to raise payouts for all Workfare recipients, and to help younger lower-wage workers, by starting Workfare younger, from the age (of) 30 rather than 35.” 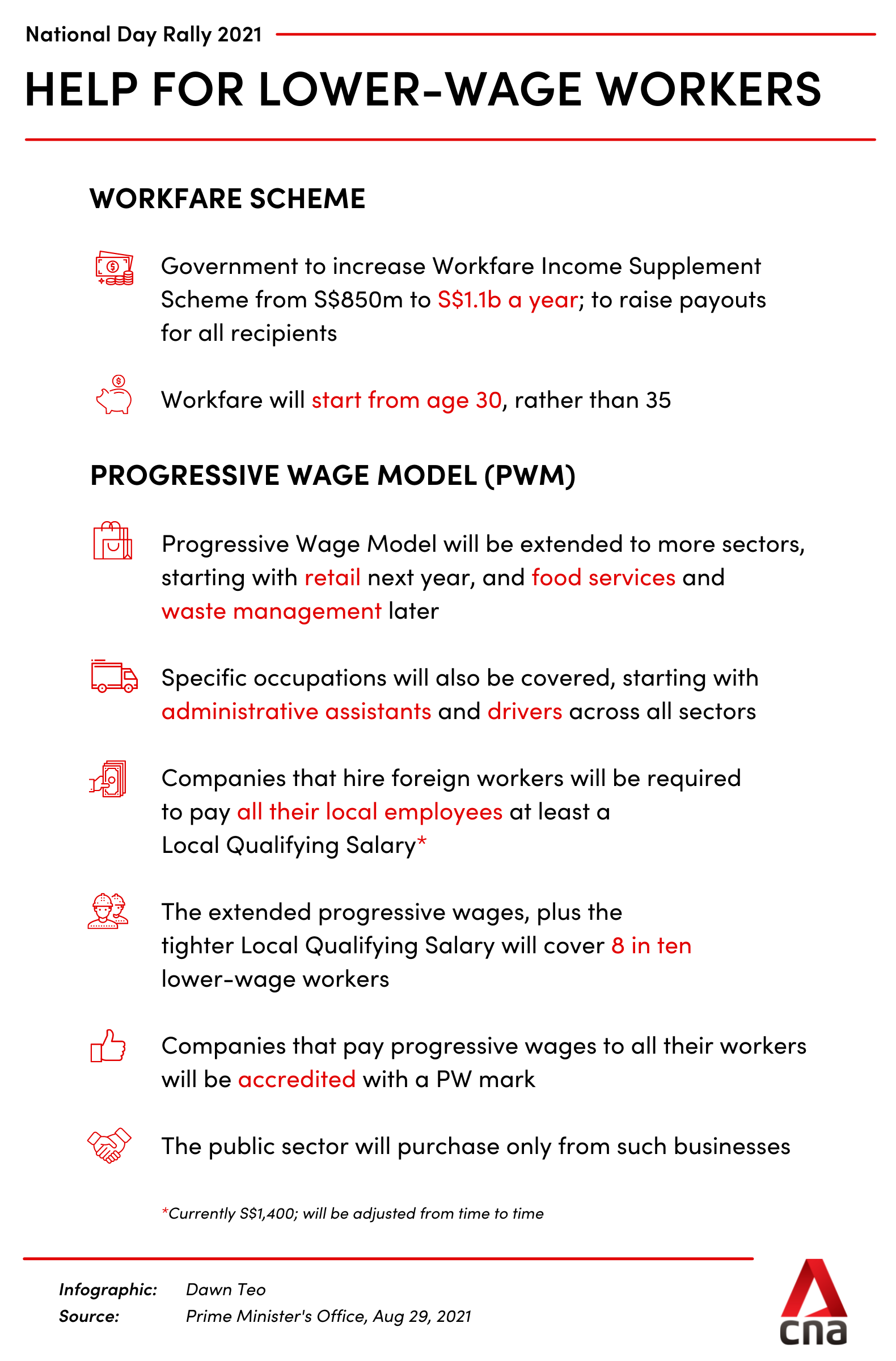 “And if we include the Workfare enhancements, almost all lower-wage workers can look forward to higher incomes within the next two years.”

The Prime Minister said he is “especially concerned” about a specific group of lower-wage workers – delivery workers who work with online platforms like foodpanda, Grab or Deliveroo.

“They are a familiar sight, especially during COVID-19, delivering our orders day and night. It is hard work, and most earn modest incomes,” he noted.

During his speech, Mr Lee shared a clip from a short film by second-year Institute of Technical Education (ITE) Central student Mohammad Ruzhael Marwazi. The film is based on his experience as a delivery worker.

“Under constant stress for reasons beyond their control: Bad weather, scary dogs, motorcycle breakdowns. Trying their best to hit their daily targets, and not always succeeding,” said Mr Lee.

Delivery workers are just like employees “for all intents and purposes”, but have no employment contracts with the online platforms.

“Therefore they lack the basic job protection that most employees enjoy, like workplace injury compensation, union representation and employer CPF,” he said.

“Besides delivery workers, there are also some lower-wage workers in other jobs who also have an employee-like relationship with platforms. They too will find it harder to afford housing, healthcare and eventually, retirement.”

More people are taking up these types of jobs, so this problem is growing, said Mr Lee, adding that the Manpower Ministry is studying it and will be holding consultations.

“We must address the issues to give these workers more secure futures.”

The cost of higher wages for lower-wage workers “will have to be shared”, said Mr Lee.

“Workers have to reskill and become more productive. Employers have to absorb part of the additional wage costs. The Government will help them with transitional support, but businesses will still have to pass on some of the costs to their customers.”

“Pay a little bit more for some of our favourite things, like bubble tea or bak chor mee, with or without hum (cockles), to help the shop cover higher cleaning and waste collection costs.

“I am glad that many Singaporeans are willing to support lower-wage workers in this way. It will not only enable the workers to keep their jobs at higher pay, it will also show that as a society, we value their work and contributions, and that they are part of us.”